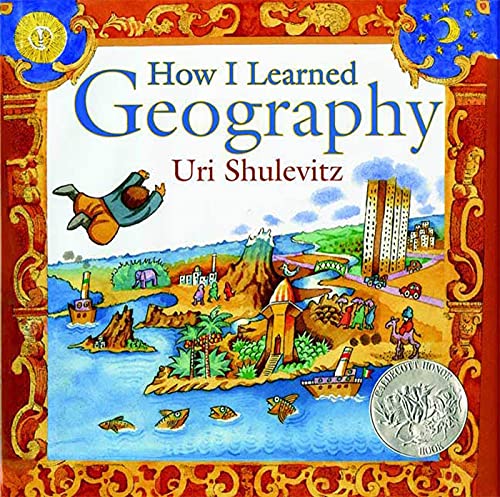 How I Learned Geography

In a work more personal than Caldecott Medalist Shulevitz ( ) has ever before offered, he summons boyhood memories of WWII and shows how he learned to defeat despair. Fleeing Warsaw shortly after the Germans invaded in 1939, the child Uri and his parents eke out a miserable existence in Kazakhstan. One day, Father comes home from the bazaar with a huge map of the world instead of food. Uri, only four or five, is “furious,” and as the couple sharing the one-room hut eats that night, the husband noisily chewing a crust “as if it were the most delicious morsel in the world,” Uri hides under his blanket to cover his envy and rage. But shortly after his father unrolls the map, the boy is swept away by exotic place-names (“Okazaki Miyazaki Pinsk,/ Pennsylvania Transylvania Minsk!”), picturing them remote from his hunger and suffering. As Uri taps into his artistic imagination and draws maps of his own, Shulevitz's illustrations shed their bleak, neorealist feel, and his beaten-down younger self becomes a Sendakian figure—sturdily compact, balletic, capable of ecstatic, audacious adventures. The story and its triumphant afterword demonstrate that Uri masters much more than geography; he realizes the importance of nurturing the soul. Ages 4-8.