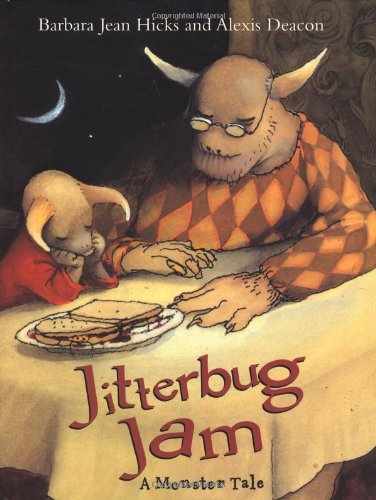 This disarming monster-under-the-bed story upholds the tradition of tales such as Mercer Mayer's but reverses the roles. Bobo is a nervous monster child with a monkeylike body, round snout and yellow horns. "I'm not fooling you: there's a who hides in my big old monster closet," he insists. Bobo shudders to think of the boy's "pink skin and orange fur on his head where his horns by right should be." He confides his fears to his grandfather, Boo-Dad, while they eat "homemade bread with jitterbug jam." In return, Boo-Dad tells a story (pictured in a gauzy, nostalgic garden sequence that alludes to Rackham and Tenniel) about his terrifying childhood encounter with a girl and advises Bobo on dealing with humans. In the inevitable confrontation, Bobo finds that he and the boy have much in common, such as bossy older brothers. Hicks, making his debut, tells the tale from Bobo's quaint viewpoint. "I'm no fraidy-cat, neither," Bobo protests, shivering at the boy's " " and running for cover "quick as lickety-split 'n' spit-fish." Deacon ( ) pictures the hairless, beige-skinned monsters as not quite cute, not quite scary. The middle-distance perspective keeps them safely at arm's length and—except at the moment he bravely speaks to the boy—Bobo lowers his head and does not look readers in the eye. The colloquial voice and uncanny illustrations create a slightly surreal, dreamy ambience, and the reassuring conclusion respects Bobo's (or anyone's) fear of the unknown. Ages 3-8.