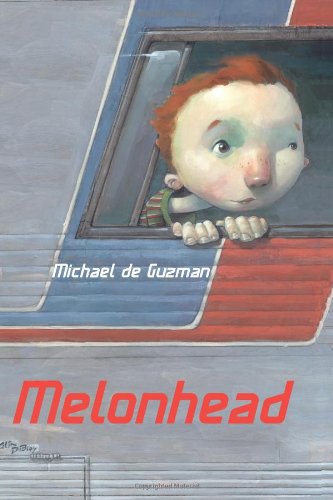 Teleplay writer de Guzman's polished first novel for children centers on 12-year-old Sidney Mellon, whose uncommonly large head and unfortunate name earn him the eponymous moniker. After being bounced between Los Angeles, home of his unsuccessful, self-centered salesman father, and Seattle, where his weak-willed mother won't stand up to her bullying second husband, Sidney decides to run away. Traveling cross-country by bus, he fabricates a series of aliases (Nestor Beachnut, Edsel Bellringer, Larry Luckman) and aspirations (to become a circus clown, actor, jockey). These he shares with the idiosyncratic characters he meets, among them a 101-year-old Native American on a mission to a pawn shop to retrieve a piece of turquoise that once belonged to his mother, a Pennsylvania couple intent on abducting him to replace their dead son, and an Irish man dying of prostate cancer. Beneath the surface eccentricities, Sidney's quest to find a home for himself has strong emotional resonance. The most poignant moments occur when Sidney, alone, mulls things over; sitting at a restaurant counter, for example, he muses that he isn't "particularly happy" about being on his own, "but he wasn't sure he knew what happiness was anyway." Young readers whose own problems seem, like Sidney's head, too large to bear will identify with this unlikely hero. Ages 10-up.