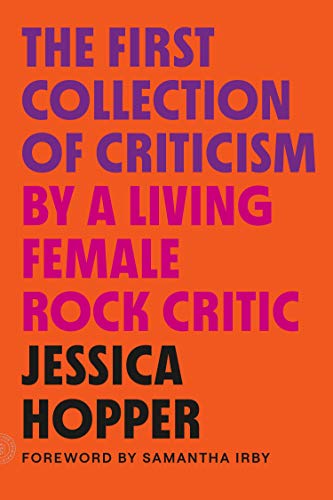 The First Collection of Criticism by a Living Female Rock Critic: Revised and Expanded Edition

Hopper, music critic and former senior editor at Pitchfork, follows up her groundbreaking feminist treatise on the punk, independent, and mainstream music scenes of the past 20 years with this revised and expanded edition that hits just as hard. Historically, she argues, women have been ignored in the boys’ club of studio producers, promoters, and record makers. These 55 pieces—covering a great variety of artists including Kim Gordon, Rickie Lee Jones, and Nicki Minaj—serve as a scorching critique of the endless hoops female musicians have had to jump through in the male-dominated music scene. In a 2015 Pitchfork review, pop-country star Kacey Musgraves is heralded for transcending the “bro-country” vibe pervasive at the Country Music Awards, while a 2018 profile of Cat Powers discusses how the artist’s talent gets overshadowed by fans’ obsession with her mental health. Essays on Fiona Apple, Liz Phair, and Joni Mitchell underscore the harsh criticism ambitious female performers constantly face (“The year Mitchell issued Blue, an album that would be a landmark in any artist’s career, Rolling Stone named her ‘Old Lady of the Year’ ”), but emphasize how, despite their unjust treatment by industry and critics, women continue to drown out the noise with their music. This fiery work is the literary equivalent of a maxed-out Marshall stack. Agent: Claudia Ballard, WME. (July)
close
Details