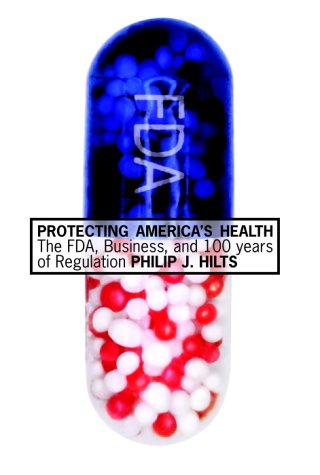 PROTECTING AMERICA'S HEALTH: The FDA, Business, and One Hundred Years of Regulation

A century ago, store shelves were filled with products that were rotten, useless or even deadly. Today, we can be relatatively confident that "no cholesterol" on a product label really means what it says, and that the terms "fresh," "beef" and "reduces fever" accurately describe a product's contents or use. These protections, now taken for granted, have been the work of what is arguably the nation's most important regulatory agency, the Food and Drug Administration. Hilts (), a health and science reporter who's written for the and the , wonderfully documents the history of the FDA from its start in the administration of Teddy Roosevelt through various crises and triumphs to the deregulatory climate of recent years. From the start, FDA officials battled entrenched business interests. Industry argued that regulation hurt profits, stymied research and kept potentially beneficial products from reaching markets quickly. How the FDA doggedly prevailed against this tide of opposition is a story of persistence, political maneuvering and make-it-up-as-you-go pragmatism. As Hilts shows, strong policies often emerged in the wake of tragedies or scandals: the case of thalidomide, a drug introduced in the late 1950s as a sedative and to relieve morning sickness but that caused pregnant women to give birth to severely deformed infants (the number is conservatively estimated at 8,000), shocked the world and led to congressional hearings and a strict new drug approval law. Even so, industry continues to lobby aggressively against regulation. Hilts has little sympathy for industry's point of view and has the facts to support this position. As the federal government once again starts talking about cuts, this book offers a sober reminder of the importance of maintaining vigorous protections against the dangers of profit-motivated decisions. Photos not seen by .