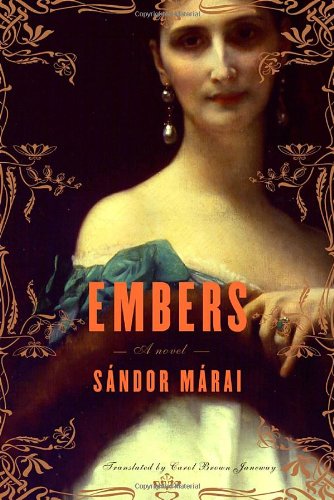 Two very old men—Konrad and Henrik, "the General"—once the closest of friends, meet in 1940 in the fading splendor of the General's Hungarian castle, after being separated for 41 years, to ponder the events that divided them. This 1942 novel by a forgotten Hungarian novelist, rediscovered and lucidly and beautifully translated, is a brilliant and engrossing tapestry of friendship and betrayal, set against a backdrop of prewar splendor. In the flickering glow and shadow of candlelight, the General recalls the past with neither violence nor mawkish sentiment, but with restrained passion. The two met as boys, Henrik the confident scion of a wealthy, aristocratic family, and Konrad the sensitive son of an impoverished baron. Of their closeness, the General says, "the eros of friendship has no need of the body." When they are young men, Konrad introduces Henrik to Krisztina, the remarkable daughter of a crippled musician. Henrik and Krisztina marry, and the two keep up a close friendship with Konrad, until one morning, on a hunt, Henrik senses that Konrad is about to fire at him. Nothing happens, but Konrad leaves at once, vanishing. For the first time, the General goes to his friend's rooms, and then his wife unexpectedly comes in. He never speaks to her again. Capturing the glamour of the fin de siècle era, as well as its bitter aftermath, Márai eloquently explores the tight and twisted bonds of friendship.