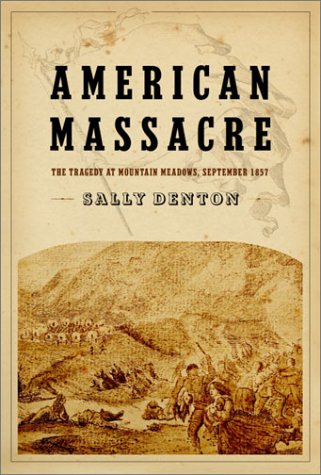 Like September 11, 2001, another September 11, in 1857, reverberates in American history as a date when the dangers of violent religious extremism became obvious, for it was then that a party of Mormons (and possibly Paiute Indians) attacked a pioneer party passing through southern Utah, killing all but the youngest children. Denton, an investigative journalist (, etc.), is not the first interpreter to take on the Mountain Meadows Massacre, but she adds a new twist. Whereas historians Juanita Brooks and Will Bagley emphasized the Mormons' religious motivations, Denton latches onto a more base explanation: greed. The Baker-Fancher party, she writes, was rich, with hundreds of livestock and a ready supply of cash, and their wealth proved irresistible to the Mormon attackers. At times, she overreaches her sources, asserting as fact what is not attested to in the historical record, e.g., that Brigham Young struck a deal with a prosecuting attorney to fix the conviction of John D. Lee, the only attacker convicted of murder. She also wrongly claims that Brigham Young became fatally ill six months to the day after Lee's execution (it was five months later) in order to make Young's death fit a prophetic legend. Although not as nuanced a historian as Brooks or Bagley, Denton is a marvelous writer who keeps this work of popular history as fresh and engaging as any novel.

The May 19 review of Juan Goytisolo's neglected to mention the previous editions of Peter Bush's English translations, published in the U.S. by North Point in 1990.