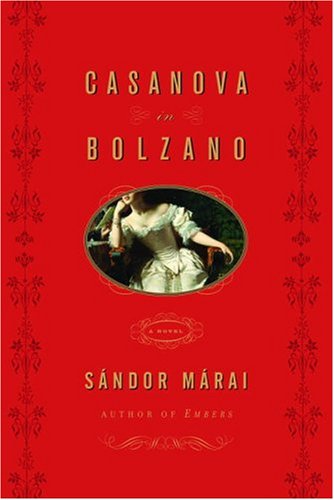 October 31, 1756: the incorrigible playboy and roving gambler Giacomo Casanova escapes from a pestilent Venetian prison. Aiming for Munich, he stops near the Austrian border at an inn in Bolzano. The imperious septuagenarian duke of Parma, Casanova's victorious former rival for the hand of Francesca—then a teenager, now the duchess of Parma, and still in love with Casanova—just happens to live nearby. To prevent another duel, the duke blackmails the legendary womanizer: either he seduces Francesca, breaks her heart and leaves, thereby curing her of the "infection" that is Casanova, or he risks being killed or turned in to the authorities. The fervent colloquy echoes the centerpiece tête-à-tête that structures , Márai's only other novel to be translated into English. Unlike , however, this book fizzles out; an austere and poignant exposition on the inexorability of fate that has been building for over 200 pages collapses into an intolerably tedious, long-winded rant by Francesca as she tries to persuade Casanova to run away with her. The harangue makes it hard to believe that anyone would fight over her and makes the reader wonder why another Márai (1900–1989) work was not translated before this one.