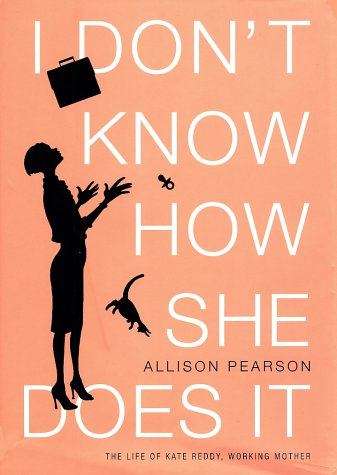 I DON'T KNOW HOW SHE DOES IT: The Life of Kate Reddy, Working Mother

This scintillating first novel has already taken its author's native England by storm, and in the tradition of , to which it is likely to be compared, will almost certainly do the same here. The comparison has only limited validity, however: both books have a winning female protagonist speaking in a diary-like first person, and both have quirkily formulaic chapter endings. But Kate is notably brighter, wittier and capable of infinitely deeper shadings of feeling than the flighty Bridget, and her book cuts deeper. She is the mother of a five-year-old girl and a year-old boy, living in a trendy North London house with her lower-earning architect husband, and is a star at her work in an aggressive City of London brokerage firm. She is intoxicated by her jet-setting, high-profile job, but also is desperately aware of what it takes out of her life as a mother and wife, and scrutinizes, with high intelligence and humor, just how far women have really come in the work world. If that makes the book sound polemical, it is anything but. It is delightfully fast moving and breathlessly readable, with dozens of laugh-aloud moments and many tenderly touching ones—and, for once in a book of this kind, there are some admirable men as well as plenty of bounders. Toward the end—to which a reader is reluctant to come—it becomes a little plot-bound, and everything is rounded off a shade too neatly. But as a hilarious and sometimes poignant update on contemporary women in the workplace, it's the book to beat.