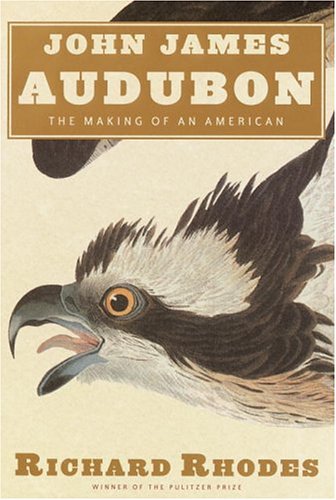 JOHN JAMES AUDUBON: The Making of an American

Born in 1785 in Saint Domingue (now Haiti), the bastard son of a French naval officer and a chambermaid, Audubon was taken to France by his father and then sent to America in 1803 to escape conscription into Napoleon's army. He began drawing birds as a child, and in America this passion grew into an obsession. His business ventures failed, and he was often short of money, but for him, birds overshadowed everything except his devotion to his wife, Lucy, who encouraged him in all his endeavors and supported the family when he went on quests for new birds to paint. Traveling into the American wilderness, Audubon, completely at home on the frontier, observed birds endlessly, and in 1826 set off for Europe to spend years promoting his multi-volume Birds of America. His life makes an engaging story, and Pulitzer Prize winner Rhodes ( ) chronicles every aspect of it, the commonplace as well as the audacious, in this thoroughly researched biography. Rhodes's prose style is subtle, enlivened by passages from Audubon's own letters and journals, and he presents an agreeable picture of a man who charmed almost everyone he met, remained devoted to his wife even though he abandoned her for years at a time and was not above lying about his birth and other details of his life. Perhaps most important, Rhodes succeeds in shedding light on how Audubon perfected his ability to capture in his depictions of birds so much life and emotion that they transcend traditional wildlife painting. Illus. throughout; 16 pages of photos not seen by .