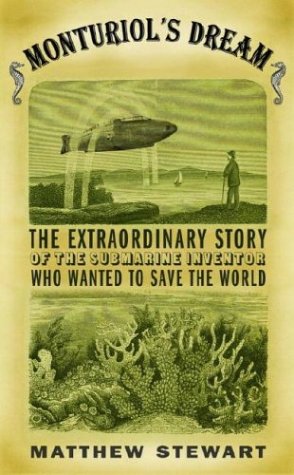 MONTURIOL'S DREAM: The Extraordinary Story of the Submarine Inventor Who Wanted to Save the World

How do submarines fit into utopia? Stewart ( ) recreates the volatile politics and culture of mid–19th-century Barcelona and of a generation of men attempting to throw themselves and their city into the modern age. Of the myriad methods they employed, the most striking is Narcís Monturiol's plan to build a submarine for the betterment of mankind. Having fled the city with the police on his heels one too many times, utopian revolutionary Monturiol had a vision of a submarine to free coral divers from hardship and then free the world from the tumult of the atmosphere. Stewart explores this fantastic connection and comes admirably close to capturing the transcendent weirdness of Monturiol's quest. Equally intriguing is his account of Monturiol's self-education concerning underwater mechanics, conveying the inventiveness and dogged persistence of his work. The reader is filled with relief and almost disbelief when in 1859 the submarine slips safely under water in the Barcelona harbor and confidently rises again. Yet Monturiol's work appears to have been a dead end. Like so much in modern Spanish history, he seems frustratingly invisible to the world at large. Stewart weaves this failure into a meditation on and celebration of Barcelona's own mercurial, passionate, backwards entrance into the modern world. B&w illus.