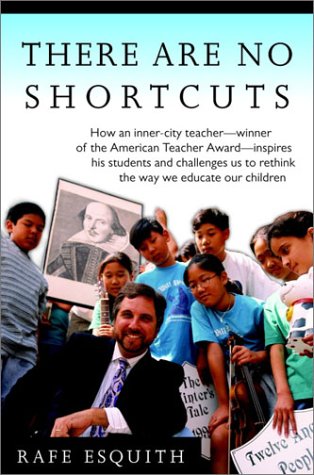 THERE ARE NO SHORTCUTS

What's a Los Angeles middle-school teacher to do when charged with a bunch of fifth and sixth graders, none of whom speak English at home and most of whom are eligible for free lunches? If you're Esquith, you have them read Twain, perform Shakespeare, play classical guitar and study algebra. You take them camping and to concerts and the theater. How do you manage to do that? If you're Esquith, your school day doesn't run from the usual 8 to 3, but from 6:30 to 5, and you're available on Saturdays and during recess, lunch and vacation time as well. You take on extra jobs and go into debt to pay for the supplements. "I have never claimed to be rational," says Esquith in this intimate, lively account of his 17-year career at an L.A. public school. Part memoir, part manual, but primarily a call for action, Esquith's book is explicitly directed to parents and "concerned citizens" as well as teachers. Esquith has known "anguish and disheartening failure," but hasn't given up. For him, education's "bad guys" often occupy the district, union or school offices and frequently the classrooms. Despite his struggles, Esquith's account is upbeat, witty and usually good-humored. There's rewarding professional success—college for his former students and honors bestowed on him—and refreshing personal achievement: his own development and transformation as he moves from saving the world to setting limits on himself, even though, of course, "there are no shortcuts."