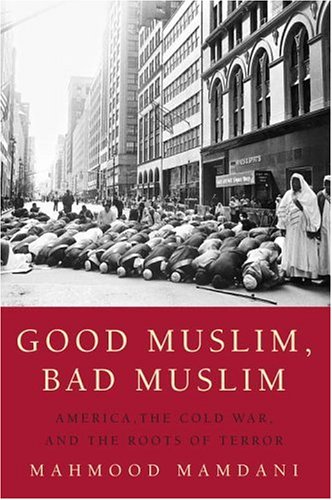 Good Muslim, Bad Muslim: America, the Cold War, and the Roots of Terror

Osama bin Laden's pronouncements are rarely published in full in the United States, but transcripts of his messages--often available overseas--provide startling insight into the political, rather than religious, nature of his thinking.""Labeling us, and our acts, as terrorism is also a description of you and your acts,"" bin Laden said recently.""Our acts are a reaction to your acts."" In this meandering rumination on modern-day terrorism, Mamdani takes a controversial step by agreeing with bin Laden, at least on this point; he argues that groups like al-Qaeda are generally motivated by legitimate political grievances with U.S. foreign policy.""In a nutshell,"" Mamdani writes,""the U.S. government decided to harness and even to cultivate terrorists"" during the latter half of the Cold War as it sought to roll back the Soviet Union's global influence. Now, with that legacy coming back to haunt its creators, Mamdani concludes that""no Chinese wall divides 'our' terrorism from 'their' terrorism. Each tends to feed the other."" These ideas evolved from a series of talks the author gave at New York's Riverside Church in the weeks after 9/11, and the book retains the informality of those discussions. There are flashes of inspiration, among them a thoughtful distinction between""political Islam"" and""Islamic fundamentalism,"" two terms that are frequently and wrongfully used synonymously. There are also frustrating digressions, and Mamdani makes few attempts to address potential dissenters. Still, readers who can overlook these drawbacks will find that this study does make provocative connections across disciplines and continents--finding similarities, say, between Liberian and Zionist settlers. Mamdani is searching for big ideas, not nuances, and in this he is successful, making his book an important contribution to the national discussion on terrorism and Islam.
close
Details