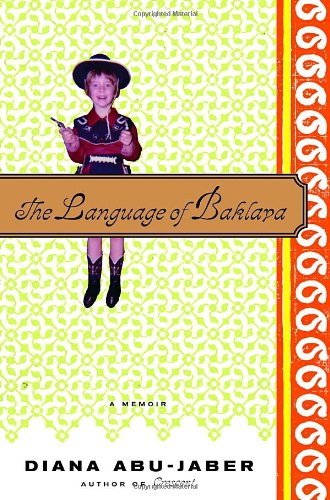 THE LANGUAGE OF BAKLAVA

Abu-Jaber's father, who periodically uprooted his American family to transplant them back in Jordan, was always cooking. Wherever the family was, certain ingredients—sumac, cumin, lamb, pine nuts—reminded him of the wonderful Bedouin meals of his boyhood. He might be eating "the shadow of a memory," but at least he raised his daughter with an understanding of the importance of food: how you cook and eat, and how you feed your neighbors defines who you are. So Abu-Jaber ( ; ) tells the charming stories of her upbringing in upstate New York—with occasional interludes in Jordan—wrapped around some recipes for beloved Arabic dishes. She includes classics like baklava and shish kebab, but it's the homier concoctions like bread salad, or the exotically named Magical Muhammara (a delectable-sounding spread) that really impress. While Abu-Jaber's emphasis is on Arabic food, her memoir touches on universal topics. For example, she tells of a girlhood dinner at a Chinese restaurant with her very American grandmother. Thanks to some comic misunderstandings, the waiter switched her grandmother's tame order for a more authentic feast. Listening to the grandmother rant about her food-obsessed son-in-law, and watching Abu-Jaber savoring her meal, the waiter nodded knowingly at Abu-Jaber. "So you come from cooking," he said, summing her up perfectly.

Tender at the Bone Stuffed Baklava