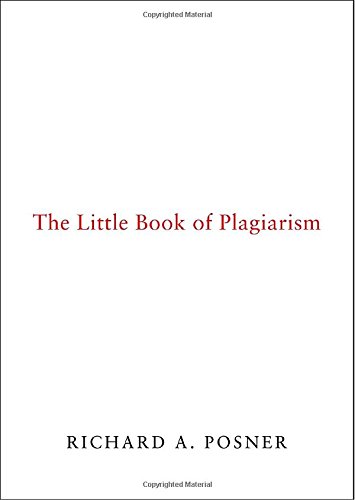 The Little Book of Plagiarism

Not all plagiarized authors will agree with Posner's conclusion that plagiarism is an "embarrassingly second-rate" offense, "its practitioners... pathetic," and that plagiarism should remain an ethical rather than a legal offense, punished by public shaming. But in a fascinating historical tour of the subject, he dismisses the idea that good art must be totally original. Shakespeare stole the plot of , and Manet's is a reworking of Titian's both examples of what Posner calls "creative imitation." But focusing on Kaavya Viswanathan novel, , Posner ( ), a judge on the U.S. Seventh Circuit Court of Appeals and expert on intellectual property, says this was a particularly modern, market-driven form of plagiarism: Viswanathan was attempting to compete against Megan McCafferty in the chick lit market by appropriating her competitor's own words. Posner focuses a lot on student plagiarism and seems to think all students should be considered suspect; schools that don't subscribe to detection software like Turnitin, he says, are "naïve." Indeed, he believes publishers should, and will, begin to use such programs, concluding, optimistically, "We may be entering the twilight of plagiarism." It's unfortunate that Posner briefly brings politics into this important and timely discussion, superciliously accusing the so-called academic left of being "soft on plagiarism."