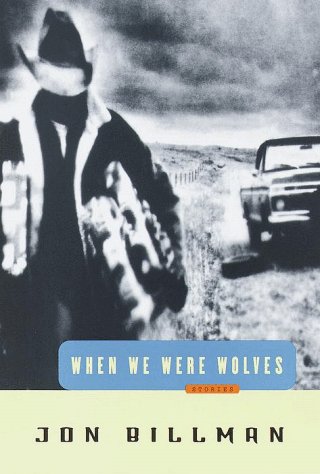 When We Were Wolves: Stories

In Billman's distinctive and engaging debut collection of 13 stories, the swaggering, even aggressively masculine rituals of hunting, fishing, prison sports and utilizing big machines blend strangely with the vagaries of religious faith and the difficulties of life in small Mormon towns. The narrator of ""Kerr's Fault"" is a divorced school teacher in Hams Fork, Wyo., who is falling afoul of the narrow strictures of his school's Mormon-dominant administration. He and another non-Mormon, Wayne Kerr, a renegade painter of nudes and salable kitsch, have some suspicions about their inferior places in the community: ""The UPS driver is a Mormon. Wayne and I are convinced our packages ride around town for a few extra days but what can you do?"" Together the two friends manifest their outsider status by means of humorously irreverent vandalism, beautiful women and art. Kerr also figures in ""Honeyville,"" a yarn about smuggling mead, of all things, into Utah. One of several stories set in the 1930s and '40s, ""Atomic Bar"" depicts the uneven partnership between 15-year-old David Hadsell, an orphan, and a wily conman named Mose Dogbane. Mose, in the aftermath of WWII, is trying to promote a uranium rush in Wyoming. The narrative becomes bittersweet as David learns that Mose's brummagem schemes have a harsh side. Billman has a keen sense of the disparate environments in which his protagonists sift through the small change of fate, whether that enterprise involves a Mormon family gleefully eating stolen beef or a hasty, $27 wedding in Reno. Like the early Tom McGuane, the author displays a clear-eyed empathy for people who are not interested in ""making it"" the American way, including such macho marginal types as firefighters (""Custer Complex"") and prisoners (in the title story). He reminds readers that the classic American archetype of the rough-guy-in-tough-times still holds some real surprises. (Aug.)
close
Details