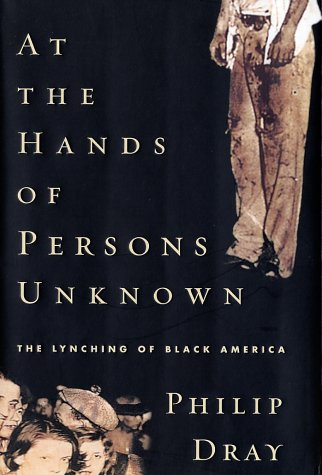 AT THE HANDS OF PERSONS UNKNOWN: The Lynching of Black America

Between 1882 and 1944 at least 3,417 African-Americans were lynched in the United States, an average of slightly more than one a week. It was not until 1952, as Dray notes, that a full year went by without a reported racial lynching. Covering the South's resistance to racial equality from Reconstruction and the 1875 Civil Rights Act (which gave rise to the widespread acceptance of public murders) through the mid–20th century, this prodigiously researched, tightly written and compelling history of the lynching of African-Americans examines the social background behind the horrific acts. Yet Dray () also covers the myriad attempts of popular and judicial resistance to lynching, in particular the campaigns led by Ida B. Wells and by the NAACP. He has pulled together a wealth of cultural material, including D.W. Griffith's 1915 , Reginald Marsh's famous 1934 antilynching cartoon in the , among much else, to supplement his impressive survey of the breadth of lynching in Southern society. While there is much shocking material here—the 1918 lynching and disembowelment of eight-month-pregnant Mary Turner; California governor James Rolph Jr.'s 1933 statement that lynching was "a fine lesson for the whole nation"—Dray never lets it dictate the complex social and political story he is telling. He faces the underlying sexual impulse of most lynchings head-on and shows how, in the 1913 lynching of Leo Frank, the fear of blacks was transferred to a Jewish victim. Whether he is explicating why the feminist-run Women's Christian Temperance Union refused to speak out against lynching, or why FDR refused to endorse antilynching legislation in the 1930s, Dray balances moral indignation with a sound understanding of history and politics. The result is vital, hard-hitting cultural history.