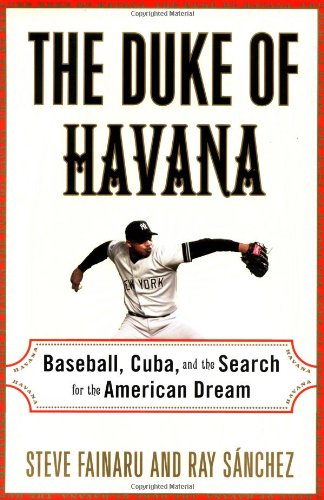 THE DUKE OF HAVANA: Baseball, Cuba, and the Search for the American Dream

With unparalleled access to players, coaches and agents in the U.S. and Cuba, Fainaru and Sanchez deliver a riveting account of the Cuban baseball establishment and the players it spawned, many of whom have defected in recent years to America to seek fame, fortune and freedom. The biggest star among the former Cuban players is the focal point of the book, New York Yankee pitcher Orlando "El Duque" Hernandez. Fainaru, a reporter, and columnist Sanchez go into tremendous detail about Hernandez 's fall from grace as the best-known player in Cuba to his whirlwind escape that eventually landed him a multimillion-dollar contract with the Yankees. The authors clear up some El Duque mysteries, such as his age; and, in an engrossing section, they track Hernandez's harrowing flight from Cuba, including four days stranded on Anguilla Cay, a brief stint in a Bahamian jail and his arrival in Costa Rica, where his agent Joe Cubas had arranged a workout for the pitcher before major league scouts. Cubas, the most colorful of a host of characters in the book, was one of the first to represent defecting Cuban players and was behind the scheme that called for Cuban players to establish residency in another country before signing with a major league team—a move that made the players free agents and thus made them available to the highest bidder. But not everyone in the complex network that ferrets players from Cuba to the U.S. finds a pot of gold. In a tragic case, agent Juan Ignacio is serving 15 years in a Cuban jail for encouraging players to defect. Part sports narrative, part tale of Cold War intrigue, it's a first-rate read.