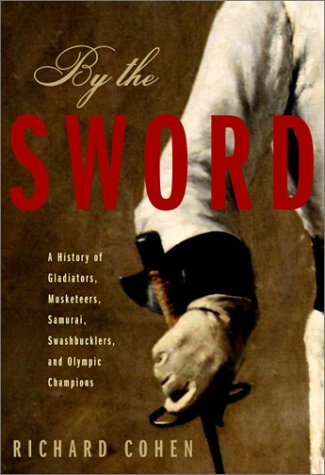 BY THE SWORD: A History of Gladiators, Musketeers, Samurai, Swashbucklers, and Olympic Champions

Cohen's enthusiastic history of the sword and of swordplay captures the adventure, romance, danger and intrigue that the weapon has represented throughout world history. The narrative contains superheroes, villains, underdogs, spies, alchemists, movie stars and champions. Rather than use a purely chronological structure, Cohen (who has written for the ) takes apart many of the influences that fencing has had on society and vice versa. Barely a subject escapes his eyes: metallurgy and the quest for a sword that would hold its edge and remain strong; the damage swords can do to a body (including purposeful gashes across the cheek); judicial duels (it was believed that God would intervene on behalf of the innocent party, who would win regardless of fencing ability); the history of the Musketeers; swashbuckling movies; modern sport fencing (which countries and even families reign supreme and why), Fascists (Mussolini and many higher-ups in Hitler's regime fenced), cheating and the Olympics. Staying away from an impersonal history, the author extends his own involvement with the sport—he was on the British Olympic team four times (1972, 1976, 1980 and 1984)—by visiting as many of his subjects as he can, from the historically superior sword-making city of Toledo to Gretel Bergmann, a figure in a Nazi fencing scandal. There are copious playful asides as footnotes filling the reader in on wonderful facts and anecdotes. For those with even a casual interest in fencing, Cohen's work will be a delightful read; he brings the daunting breadth of the history of the sword within easy reach of the curious.