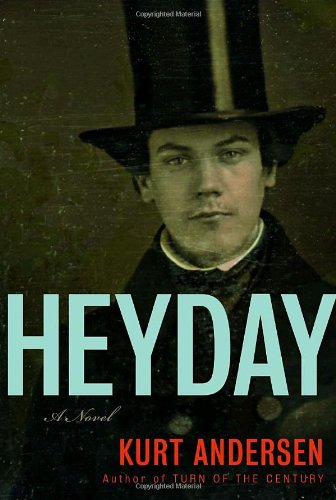 This historical novel may surprise readers who know Kurt Andersen as the cofounder of magazine and the author of the wise and acerbic (1999). It's set in the mid–19th century, for one thing, and not—at least not ostensibly—about media or celebrity. Benjamin Knowles is a young Englishman infatuated with all things American, including and especially the part-time actress/part-time prostitute Polly Lucking, whom he meets on his first passage to New York. Just as Knowles and Polly are about to go public with their love, Knowles does that boy-thing—i.e., says something stupid—and she flees New York. It's worth getting through the slowish beginning to arrive at the delightful, intelligent last two-thirds of this long novel when Knowles teams up with Polly's damaged brother, Duff, and family friend, Timothy Scaggs, a journalist of sorts, in a trek west in search of the freethinking Ms. Lucking, with a murderer just behind them (it's a subplot). Andersen's second novel is more than just a love story or a history lesson (though there are details included that make it clear how much research Andersen did); it's a true novel of ideas. The group visits a 19th-century health farm/cult, for example. The occasional historical figure—e.g., Charles Darwin—makes an appearance as well. There are shades of T.C. Boyle's , as well as aspirations toward E.L. Doctorow. But in the end, this second novel belongs to Andersen, a tale of bright, rambunctious, aspiring young people. Like them, the book is rowdy, knowing—and wholly American.