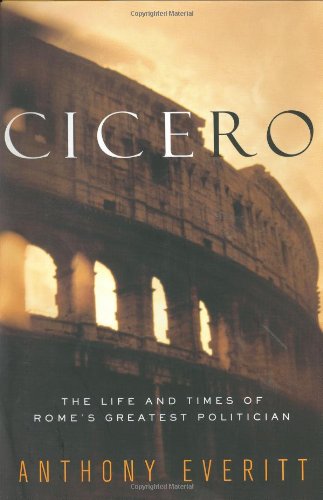 CICERO: The Life and Times of Rome's Greatest Politician

Using Cicero's letters to his good friend Atticus, among other sources, Everitt recreates the fascinating world of political intrigue, sexual decadence and civil unrest of Republican Rome. Against this backdrop, he offers a lively chronicle of Cicero's life. Best known as Rome's finest orator and rhetorician, Cicero (103 –43 B.C.) situated himself at the center of Roman politics. By the time he was 30, Cicero became a Roman senator, and 10 years later he was consul. Opposing Julius Caesar and his attempt to form a new Roman government, Cicero remained a thorn in Caesar's side until the emperor's assassination. Cicero supported Pompey's attempts during Caesar's reign to bring Rome back to republicanism. Along the way, Cicero put down conspiracies, won acquittal for a man convicted of parricide, challenged the dictator Sulla with powerful rhetoric about the decadence of Sulla's regime and wrote philosophical treatises. Everitt deftly shows how Cicero used his oratorical skills to argue circles around his opponents. More important, Everitt portrays Cicero as a man born at the wrong time. While Cicero vainly tried to find better men to run government and better laws to keep them in order, Republican Rome was falling down around him, never to return to the glory of Cicero's youth. A first-rate complement to Elizabeth Rawson's or T.N. Mitchell's monumental two-volume biography, Everitt's first book is a brilliant study that captures Cicero's internal struggles and insecurities as well as his external political successes. Maps.