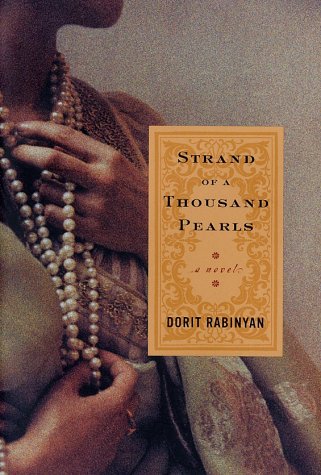 THE STRAND OF A THOUSAND PEARLS

Rabinyan's second novel (after the international bestseller ) maintains an expert balance between lyricism and tough-mindedness. Like Isaac Babel in his Odessa short stories, she knows that a metaphor is not an ornament, but rather a probe (or even a bullet) into the heart. For instance, here is how we are introduced to a rich businessman: "in those days he was squeezing money and tears out of almost every nation in Africa. He began his business career by importing hollow gold jewelry, but by the time he met Sofia he had already become a major purveyor of tear-gas." The Sofia in question is one of the four Azizyan daughters, the beauty of the family. Iran, the mother of this brood, and Solly, their fisherman father, are both Persian-speaking emigrants to Israel. The story is given to us as a sort of allegorical fresco—it begins on the morning of Sofia's sister Matti's 11th birthday and examines, in separate insets, the weddings of the girls and their parents' pasts, returning periodically to Matti's birthday. Matti, poor girl, is half-mad, imbued with the energy and craziness of her stillborn twin brother, Moni. The other daughters—Lizzie and Marcelle—aren't doing so well either. Lizzie used to embarrass her mother by masturbating in public. Marcelle falls hopelessly in love at 13 with Yoel Hajjabi, finally marries him and then falls out of love with him on the day after her wedding. Matti, meanwhile, spends her birthday cutting up the family album and hiding in the backyard with the specter of her demon-lover twin. Rabinyan is a surprising writer—the reader's casual expectation that her lyricism will become vapidly sentimental is agreeably disappointed by frequent instances of the coldest realism.