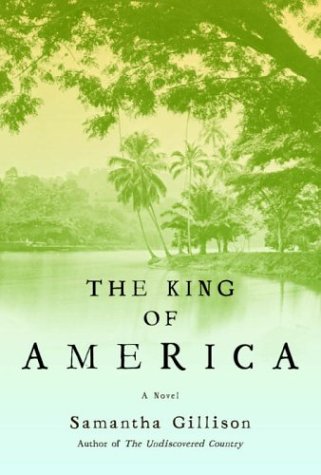 THE KING OF AMERICA

Like her acclaimed 1998 debut, , Gillison's second novel is set in New Guinea (where she lived in the early 1970s) and revolves around an introspective only child of bitterly estranged parents. Stephen Hesse—loosely modeled on Michael Rockefeller, who disappeared 40 years ago in then Dutch New Guinea while collecting primitive art for his father's collection—is an excruciatingly lonely, earnest kid struggling to develop an identity under the crushing weight of his father's millions. Gillison skips nimbly through time and space to create a moving portrait of an intellectual, enthusiastic young man who's finding that all his glittering Hesse gold (there's so much of it that even the author sometimes seems to be in its thrall) is as much a curse as a blessing. Aspiring anthropologist Stephen eventually finagles his way onto a Harvard research team bound for New Guinea, and both he and the novel spring fully to life with the advent of dense, teeming coastlines and vertiginous mountain interiors. When compared to the richness of New Guinea's unbridled nature and awesome tribal art, Stephen's previous life feels flat and lifeless. His boredom as a young man in the U.S. occasionally infects the writing itself, but Gillison redeems herself in the jungle: in her loving hands, the lush landscapes throb with color and intensity. By the time Stephen finally disappears, as the reader knows he will, on an ill-advised art-buying mission among head-hunting tribes, one can't help mourning the loss of whatever this awakening might have spurred him to become.