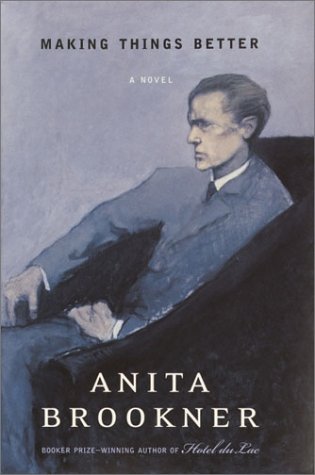 Making things better has been Julius Herz's lifelong responsibility. He is yet another character in Brookner's sepia photograph album of dutiful sons and daughters trapped by familial duties into stoic existences. Like many of her protagonists, Julius is an outsider whose assimilated Jewish parents settled in London to escape the Nazis and never really fit in. His older brother Freddy's nervous breakdown, which ended his incipient career as a concert pianist, hurled their parents into bottomless grief, and firmly placed Julius under obligation to minister to the needs of all three. Now they are all dead. At 73, retired from an undemanding and unfulfilling job and amicably divorced, Julius faces existential questions with a sense of panic. He's desperate to find a purpose for the rest of his life, to create some companionship and perhaps even intimacy, and to put an end to his lonely interior exile. Brookner's gentle exploration of Julius's emotional dilemma is pursued with exquisite precision and empathy. In her novels, fate is cruel and hope of happiness a chimera, yet her characters are so fully realized that one feels the beat of life in their veins and longs for them to yield to their stifled urge for freedom. In Julius's case, the resurgence of sexual desire and an unexpected letter from the cousin he has loved since their youth in Berlin provide insights into what he belatedly recognizes as "the fallacious enterprise of making things better." While he grasps at a last chance at happiness, the narrative becomes a meditation on the longing for love, its risks and dangers, and how its absence makes life itself null and void. If Brookner treads a small territory again and again, there is no sense of déjà vu or of staleness. She has the facility to make each of her extended character studies (this is her 21st novel) ring with psychological truth.