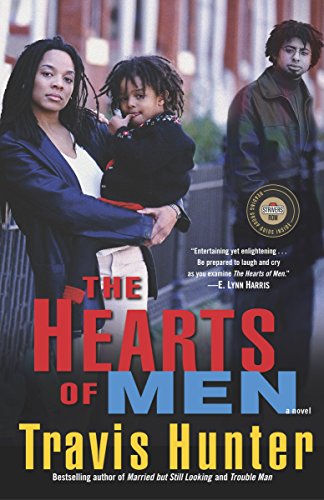 THE HEARTS OF MEN

What his prose lacks in sophistication, Hunter makes up for in earnestness in this debut novel about the suburban African-American experience. Prodigy Banks works at a large Atlanta finance company, often paying more attention to his female co-workers than to his job. Despite his lady-killer habits, the handsome Prodigy is a picture of respectability, going to church, taking good care of his house and serving as a role model for his cousin Jermaine, who hasn't left the streets behind as quickly as Prodigy. Under the influence of his father figure Poppa Doc, Prodigy volunteers at a youth center, where he meets the adorable Blake and Blake's even more charming mother, Nina. She offers Prodigy his first chance to settle down, and he has to weigh that offer while trying to serve as peacemaker for the domestic disputes of his friends and family. Meanwhile, Poppa Doc has his own problems to work out, trying to motivate his spoiled son and restore some love to his daughter's marriage. Hunter has no confidence in subtext; he explains every gesture for the reader's benefit and his characters speak as if reading from the world's least subtle cue cards. Prodigy, in particular, is given to mouthing public service announcements about the black man's responsibility to family life. Still, Hunter's agenda is the strength of this book; even cynical readers may be won over by his relentless positive message and push for African-American communities built on respect and love.