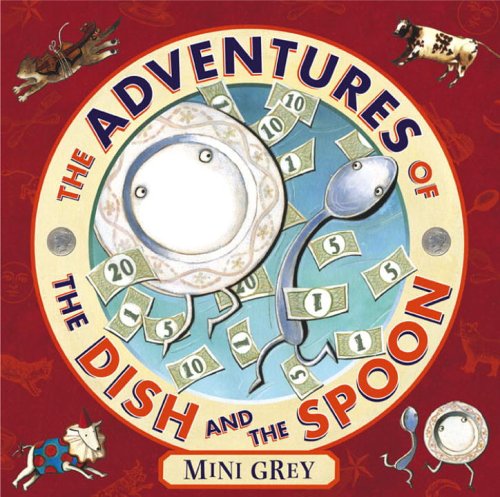 The Adventures of the Dish and the Spoon

Hey Diddle Diddle" serves as prequel to this delightful swashbuckler, which chronicles the ups and downs of a nursery-rhyme romance. When someone (furry paws imply it's the famous fiddling cat) plays a red disk labeled "Hey Diddle Diddle" on a child-size record player, the Dish and the Spoon sprint into the moonlit night. "How could we resist?" asks the Spoon, who tells their story. In a three-part spread, they leap from an English cliff and sail (like Dahl's Giant Peach) to the Statue of Liberty, with the Dish acting as a raft and the Spoon as a mast with a kerchief sail. In 1920s New York, their acrobatics are a vaudeville sensation. Soon they're driving a cream-yellow roadster and throwing money around with

Gatsbyesque abandon. But they squander their cash and end up on Skid Row, among cracked teacups and the sinister Carving Knife Gang. Grey ( ) moves briskly from one comic cliffhanger to the next, including a close call on the railroad tracks and a Bonnie-and-Clyde bank heist with tragic consequences for the ceramic moll. Years go by before a tearful reunion in a lowly junk shop (filled with objects from the opening spread), but unlike Randolph Caldecott's shattering version, in which the broken plate does not recover, Grey foresees a future for the antique heroes. She squeezes multiple panels into every spread, alternating between the main plot and clever asides; tiny details chart the couple's showbiz career ("New in Town: The Knife and the Fork") and crime spree ("wanted" posters identify the Dish's "glazed expression" and the silver utensil's "metallic colour"). Sprung from a familiar stanza, this inventive tale of true love will sustain many rereadings by readers of all ages. Ages 6-up.