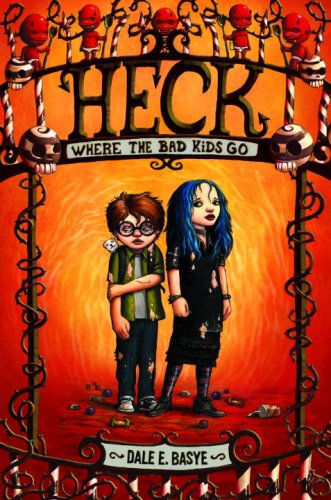 Heck: Where the Bad Kids Go

In his uproarious send-up of all things purgatorial, debut novelist Basye gives readers a new lease on afterlifes. Milton, a blameless 11-year-old bookworm, and his “blue-haired, thirteen-going-on-thirty-year-old” sister, Marlo, are at the Mall of Generica (in Generica, Kans.), when they meet their demise in a ludicrous accident (Milton's nemesis plants a stick of dynamite in a 20-foot-tall statue made from marshmallow: “Smoke, noise, and burning marshmallow fused together to create a sickeningly sweet moment, one that was both ridiculously tragic and tragically ridiculous”). Unfortunately, Marlo has been shoplifting and stashed her goods in Milton's gear, so both get sent to Heck—a hell for the under-18 demographic. Never mind that Milton is technically innocent: “The devil's in the details,” snaps Heck's principal, Bea “Elsa” Bubb. After a series of ill-fated yet deliciously documented attempts to escape, one sibling succeeds in returning from the Underworld, but the finale is almost beside the point. The author's umpteen clever allusions—characters' eternal fates are decided by standardized “Soul Aptitude Tests”; Mr. R. Nixon teaches ethics to evildoers in room 1972—make this book truly sparkle. Ages 9–12.