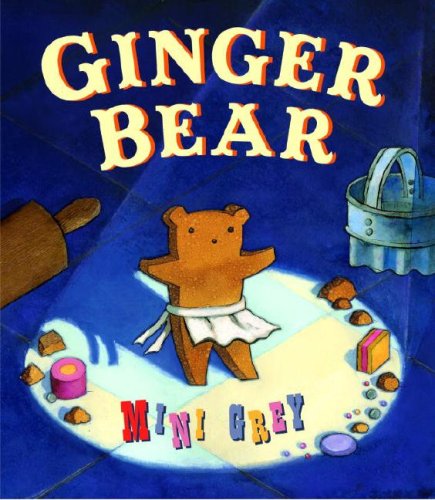 As she showed in her soulful , Grey has a knack for reimagining nursery rhymes and other children's classics. This story of an independent-minded cookie alludes to “The Gingerbread Man,” noting that “the life of a cookie is usually short and sweet.” But fate smiles on Ginger Bear: he escapes being eaten by his baker, Horace, whose Mum interrupts every time he gets ready to take a bite. At bedtime, having missed his chance for a snack, “Horace put the bear in a little tin and put it on his pillow” for later. As sleepy clock faces strike midnight, Ginger Bear comes to life and bakes a crispy batch of bears for company, decorating them in carnival icing and dots. Poised atop a tower of cookbooks, Ginger Bear becomes the ringmaster of a culinary circus. But the festivities end abruptly with the arrival of the family dog who “liked cookies. (But not in a way that is necessarily good for the cookies.)” Grey doesn't sugarcoat her watercolor and mixed-media illustrations: she plays the cookie carnage for laughs, with sole survivor Ginger Bear overlooking a crumb-covered linoleum floor. The mock-pathos implies that cookies are meant to be eaten. No fox can catch this gingerbread man, though, whose recipe for a doughy rumpus calls for a bit of and a dash of Young readers should be pleased to discover how Grey allows her edible hero to spend the rest of his days. Ages 5-8.