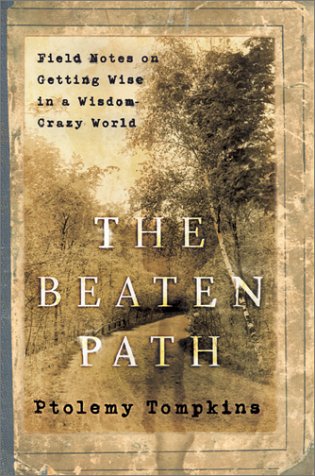 THE BEATEN PATH: Field Notes on Getting Wise in a Wisdom-Crazy World

Tompkins () offers a witty, provocative memoir about the struggle to get wise in a time and in a culture where the world's great wisdom books are as available as candy bars at the 7-11. For all their amazing abundance, according to the author, "these maps don't seem to be able to speak to us in the same way that they did back in the time when there was essentially one wisdom source per culture." With deadpan humor, the disaffected son of a once-legendary New Age author, Peter Tompkins (), describes dropping out of Vassar in the early '80s to emulate the "Life Manuals," pop wisdom–getting narratives like Carlos Castenada's shaman saga. Along with lectures on Taoism and Zen Buddhism by Alan Watts and the novels of Henry Miller, these manuals inspired Tompkins to revere teachers who got enlightened without the usual pitfalls and rules. Alas, slogging through the jungles of Colombia as a photographer's assistant initiates Tompkins only in the embarrassment of being a wealthy white witness to dire poverty. He encounters one drunken shaman who agrees to be photographed for money, and that proves a far happier event than the psychedelic trip that Tompkins later takes on a New Age ranch in New Mexico. He ends with the valuable insight that our wisdom-commodifying contemporary culture has lost a taste for wisdom as process. Astute readers will long for Tompkins to put his hinted-at Christian card on the table. Indeed, essays like "Mystics and Zen Masters" by Thomas Merton demonstrate how a grown man secure in his own tradition might study another tradition for the light it sheds on his own.