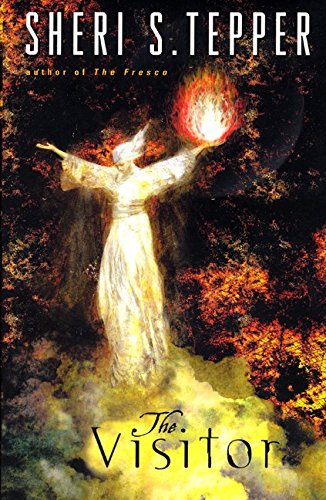 Known for her thoughtful and sensitive exploration of such subjects as religion, politics and familial relationships, Tepper () here weaves two stories into an intriguing, and frequently chilling, vision of the future. After the mysterious deaths of her brother, her father and her stepmother, Dismé Latimer is left to the disdainful care of her ambitious older stepsister, Rashel. In a world where the ruling Regime regards questioning authority as un-Regimic, the government trades with demons for precious technology. Admitting to the existence of magic can get you "bottled" in a living death. Dismé must tread lightly—particularly after Rashel gains a high post as conservator of the famed Faience Museum, once home to one of the last practitioners of magic. Magic disappeared, history says, during the Happening, a cataclysm so lost in time that no one knows exactly what happened—no one except astronomer Nell Latimer, Dismé's many-times-great-grandmother, and a handful of hidden survivors who strive to keep science and learning from being lost forever. As Dismé strives to understand—and disguise—her growing magical abilities from Rashel and the Regime, Nell and her colleagues prepare for the worst: the Visitor who caused the global wreckage of the Happening is on the move again, getting closer to their hidden redoubt every day, threatening to finish the job it started millennia ago. Once again Tepper has created a mesmerizing story full of intriguing characters, resonant images and powerful themes.