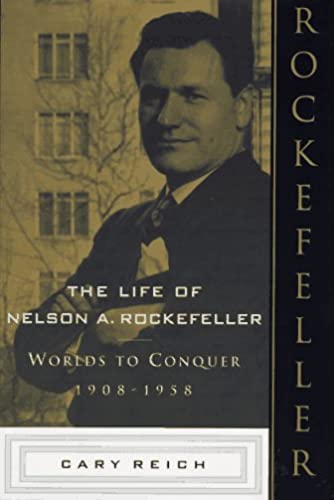 The Life of Nelson A. Rockefeller

""Looking at Nelson,"" Reich quotes a colleague as saying, ""was like looking up close at an elephant. A lot of us saw a piece of the elephant, and some saw more of the elephant than others. But none of us saw the entire elephant."" This elephantine first part of a two-volume life will have readers eager for the other half. No hagiographer, Reich (Financier: The Biography of Andre Meyer) sees ""rampant ambition"" propelling John D. Jr.'s second son, who refused to be merely one of his father's viceroys in the Rockefeller empire. To leverage his patrimony into external power and influence, he employed a personal engine ""perpetually in overdrive,"" his confidence and his energy nourished by near royal status, extramarital sexual success, pep pills and tranquilizers, and unlimited money. Rockefeller's wealth would buy the industrious and talented staff that could develop ambitious schemes and sustain his frenetic pace in marketing them. In his 20s he was already master of the ""awesome limestone forest"" that was Rockefeller Center, and the Museum of Modern Art was his personal fiefdom. In his 30s and 40s, in and out of public service, he engineered Roosevelt's wartime Good Neighbor policy in Latin America, ran the Point Four postwar economic program for developing nations, devised U.N. Article 51, which would make collective assistance to invaded South Korea legal, helped create a huge Cabinet department for human services. Yet Rockefeller was increasingly frustrated by his ineffectuality in appointive positions among those he considered political pygmies. At 50, at the close of Reich's absorbing biography, Rockefeller runs for political office for the first time, as the Republican gubernatorial candidate for New York, an office he would hold from 1959 to 1973, in a populist makeover that has him dreaming even of the presidency. Artfully constructed, veined with grand themes, based on prodigious research including more than 350 interviews, this is a definitive portrait. Photos not seen by PW. (Nov.)
close
Details