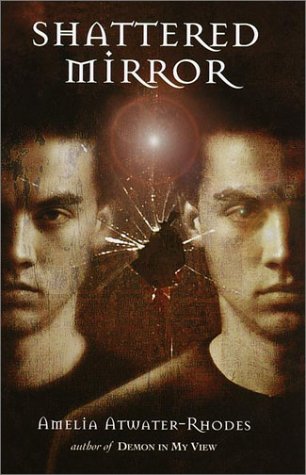 In this third installment in the series that began with , Atwater-Rhodes focuses on teen witch (and vampire killer) Sarah Vida, who "never asked for anything more complex than the simple good and evil definitions she had been raised on" but gets more than she bargained for when she befriends vampire siblings Nissa and Christopher. This is trouble: it's harder to kill when you know your prey, and her mother—the most infamous witch of all—will disown her if she finds out about the friendship. Her conflict intensifies when she discovers that Christopher's twin is Nikolas, the same vampire who long ago murdered a Vida witch. Atwater-Rhodes chooses an interesting theme (no one is purely good or evil), and she builds some creative elements around it. SingleEarth, an organization of all creatures, for instance, includes vampires and witches who work together for peace. Her description of Nikolas, whose home and clothing are completely black and white, plays into this well, and provides for some striking visual images. Some of her writing, though, as in Sarah's final faceoff with Nikolas and Christopher, is over the top ("I want it as much as humans want to breathe, but I have control," Christopher says of Sarah's blood). Still, fans of the teen goth writer will likely find plenty to feast on here. Ages 12-up.