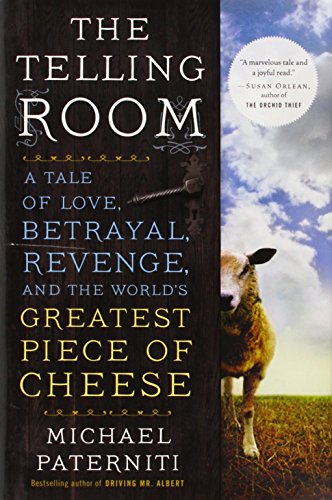 The Telling Room: A Tale of Love, Betrayal, Revenge and the World’s Greatest Piece of Cheese

Working as a proofreader on the newsletter for his local deli, Paterniti stumbled upon the story of a sublime cheese, Páramo de Guzmán (named after the family village from which it originates), that the deli’s owner discovered by chance in London. Made from the fresh milk of Churra sheep, “the cheese was submerged, after its first aging, in extra-virgin olive oil and aged again, for at least a year.” Intrigued by the story, as well as by the craft and love that went into making the cheese, Paterniti sets off on a quest to find the creator of Páramo de Guzmán and to listen to his story. Over the course of a decade, Paterniti (Driving Mr. Albert) visits Ambrosio Molino’s contador, or telling room (a space in a handmade cave that in earlier times functioned as cold larders for individual families and villages), listening raptly as the cheese maker recounts a tale both joyous and sad, of discovery, betrayal, revenge, and restoration. Much as Molinos regales Paterniti with his rich voice, Paterniti entertains us by retelling this saga of a man who successfully recovers his family’s cheese recipe, whose childhood friend betrays him by stealing the business, and who half-heartedly seeks revenge for the betrayal. Yet, this is also Paterniti’s story: “Ambrosio gave me a brief glimpse of a different, compelling sort of life, a life in which there seemed to be more time for family and conversation, for stories and food.” So in 2012 Paterniti moved his family to Guzmán. Paterniti’s zestful storytelling carries us along on a delightful journey through a village rich with the traditions of food and family. Agent: Sloan Harris, ICM. (July)
close
Details