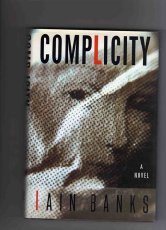 In 1984, Banks's first novel, The Wasp Factory, attained cult status in England for its accomplished yet brutal portrait of a serial killer. His newest novel (after Against a Dark Background) carries on that tradition by centering on a series of cruel, if poetically just, killings. The point of view shifts back and forth between that of the unnamed murderer, whose outrages are presented in the second person, and that of an Edinburgh-based journalist, Cameron Colley, who's tracking the killer and whose story is told in the first person. The police think that Colley, who models himself slavishly on ``St. Hunter'' (Hunter S. Thompson)-downing double whiskeys, smoking dope, speaking a gonzo slang and carrying on an S&M affair with a married woman- is the murderer. Certainly, Colley feels a certain admiration for that avenging angel, who tailors his punishments to fit his victims' supposed crimes, e.g., brutally raping a judge who once exhibited leniency to a rapist. Banks's handling of this volatile scenario is extremely graphic, sadistic-and rather obvious, though effective. He's a good enough writer to seduce readers into sharing not only Colley's admiration for the killer but also, through his use of the second person, the killer's relish in the act of murder: complicity, indeed. (Jan.)
close
Details