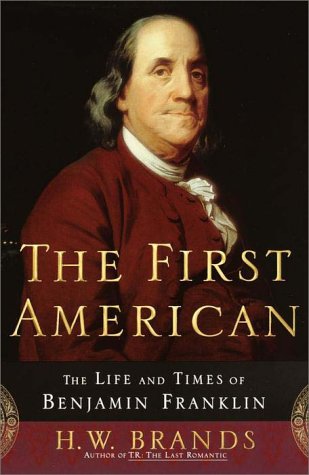 The First American: The Life and Times of Benjamin Franklin

""Franklin's story is the story of a manDan exceedingly gifted man and a most engaging one. It is also the story of the birth of AmericaDan America this man discovered in himself, then helped create in the world at large,"" says Texas A&M historian Brands (T.R.: The Last Romantic, etc.) in the prologue to his stunning new work. Franklin's father took him out of school at age 11, but the boy assiduously sacrificed sleep (while working as an apprentice printer) to read and learn, giving himself rigorous exercises to develop his ease with language and discourse, among other disciplines. In essence, as Brands vividly demonstrates, Franklin defined the Renaissance man. He made multiple contributions to science (electricity, meteorology), invention (bifocal lenses, the Franklin furnace) and civic institutions (the American Philosophical Society, the University of Pennsylvania, the U.S. Post Office). But Brands is primarily concerned with Franklin's development as a thinker, politician and statesman and places his greatest emphasis there. In particular, Brands does an excellent job of capturing Franklin's exuberant versatility as a writer who adopted countless personaeDevidence of his gift for seeing the world through a variety of different lensesDthat not only predestined his prominence as a man of letters but also as an agile man of politics. From Franklin's progress as a self-declared ""Briton""Dserving as London agent for Pennsylvania, Massachusetts and other coloniesDto his evolution as an American (wartime minister to France, senior peace negotiator with Britain and, finally, senior participant at the Constitutional Convention), Brands, with admirable insight and arresting narrative, constructs a portrait of a complex and influential man (""only Washington mattered as much"") in a highly charged world. (Sept.)
close
Details