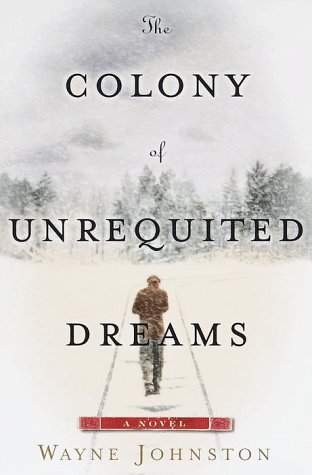 The Colony of Unrequited Dreams

""As lived our fathers, we live not,/Where once they knelt, we stand./With neither God nor King to guard our lot, We'll guard thee, Newfoundland"": so rings the resigned, ironic patriotism practiced by the inhabitants of the bitter-cold northerly territory in Johnston's (Human Amusements) grand and operatic novel, a bestseller and literary prize nominee in Canada. Treating the history of Newfoundland as a bad joke--whose punch line is finally delivered on April 1, 1949, when the in-limbo British territory joins in confederation with Canada--Johnston's most compelling character (in a book that teems with eccentrics, drunks, swindlers and snobs), Sheilagh Fielding, writes a condensed version of the classic History of Newfoundland. The terse and mordant chapters of this masterwork, to which she devotes all her energies (when not scribbling furiously in her epistolary diary or eking out the columns of her daily political satire, ""Field Day"") are interleaved in the narrative to great effect. The bulk of the book comprises the autobiographical musings of historical figure Joe Smallwood, whose rise through local socialist activism to international political eminence culminates in his orchestration of the treaty with Canada. It is dwarf-sized Smallwood's tireless ambition, as well as his crippling romantic insecurity, that keep him forever at arm's length from his childhood love and best friend Fielding. In their hometown of St. John's, in Manhattan's downtown tenements, in the desolate railroad man's cabin where Fielding holes up with a typewriter and a bottle of Scotch, Smallwood and Fielding torment and intrigue one another, each harboring the shame and fury of a secret from their school days that has gone unresolved. In a book of this magnitude and inventiveness--some of Fielding's quips are hilarious, and Johnston proves himself cunning at manipulating and animating historical fact--it is perhaps the device of this lifelong secret that most tests the reader's faith: that full disclosure resolves all the complicated mysteries of this book is slightly disappointing. Nonetheless, the variety provided by Fielding's writings is delightful, and this brilliantly clever evocation of a slice of Canadian history establishes Johnston as a writer of vast abilities and appeal. BOMC and QPB selections; author tour. (July) FYI: Johnston's comic novel, The Divine Ryans (not published in the U.S.), will be released by Anchor in August to coincide with the film version, starring Pete Postlethwaite.
close
Details