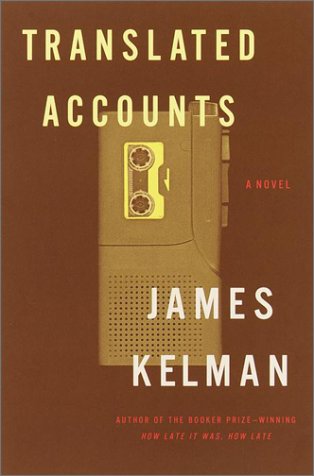 Scottish writer Kelman, author of the Booker Prize–winning , here offers up a novel that is like a test case of Adorno's famous phrase, "to write poetry after Auschwitz is barbaric." Adorno meant that, in the service of mass murder, language had cut itself off from its emotional base, the affection that precedes communication. In Kelman's novel, language is deprived of both its beauty and its grammar, and studded with ugly political jargon and neologisms. A note at the beginning explains that the "accounts" that make up the book are narrations of incidents "transcribed and/or translated into English, not always by persons native to the tongue." The accounts are testimonies from some unspecified killing field, with elements reminiscent of Rwanda, Yugoslavia and even the Cultural Revolution in China. In "sections," which are, presumably, holding areas, enemies of some kind are processed. Women and men are beaten, raped and murdered. People are under observation by "securitys," foreign observers interact with suspicious locals and bodies strew the landscape. Resistance cells, or "campaign formations," engage in self-criticism sessions. The unnamed narrators emerge and vanish in a haze of broken English, through which we glimpse a man in a transit area or camp, a resister and a man who may be with the government securitys, as well as others. The language has an ugly, gears-jamming feel to it, with sentences pieced together like: "All concentration now was on this demonstration, fully placed to the elderly man whose role so was primary." Kelman's experiment ultimately fails, since exhausting and desensitizing the reader does not necessarily lead to insight into the nature of state-sanctioned atrocity. Admirers of will appreciate what Kelman is trying to do in his newest novel, but even they may find it close to unreadable.