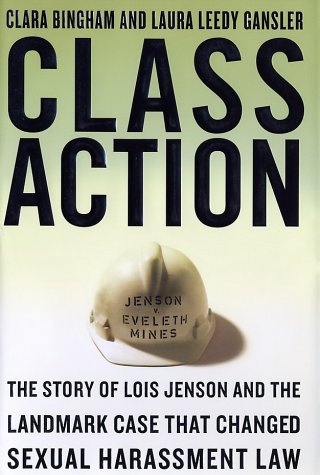 CLASS ACTION: The Story of Lois Jenson and the Landmark Case that Changed Sexual Harassment Law

In 1997, in reversing a lower court decision, federal appellate Judge Donald Lay wrote in a sexual-harassment class-action lawsuit, v. , "The emotional harm, brought about by this record of human indecency, sought to destroy the human psyche as well as the human spirit.... The humiliation and degradation suffered by these women is irreparable." Journalist Bingham's () and attorney Gansler's deeply felt and disturbing narrative is the story of what informed Judge Lay's decision. In 1975, Lois Jenson became one of the first women to work in the iron mines of Minnesota and the lead plaintiff in the lawsuit. Eveleth Mines was Jenson's employer. The center of the story is the 25-year ordeal Jenson and other women miners underwent: the harshness and callousness of the abuse directed at the women in the uncivilized and misogynist atmosphere of the mine will outrage readers. The equally brutal treatment class members received in the civilized venue of the federal court system, especially by the lawyers for Eveleth, will shock them. The matter-of-fact description of Eveleth's lawyers' assault on Jenson's character during a deposition that inquired about the most intimate details of her life has tremendous immediacy. Because of the personal price the plaintiffs pay, and despite the success of the litigation, this account falls somewhere between a cautionary tale about the dangers facing those who challenge entrenched institutions and a bittersweet celebration of the ultimate effectiveness of the justice system.