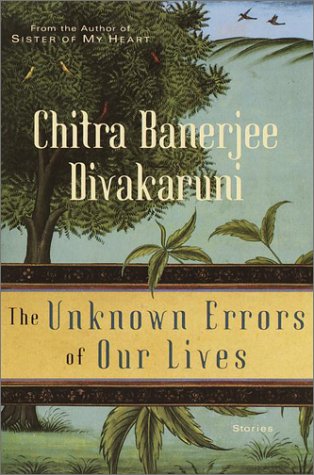 The Unknown Errors of Our Lives

The female protagonists of eight of the nine stories in Divakaruni's sensuously evocative new collection are caught between the beliefs and traditions of their Indian heritage and those of their, or their children's, new homeland, America. Nowhere is this dichotomy of cultures so well evoked as in the title story, in which Divakaruni's gift for writing image-filled prose illuminates Berkeley resident Ruchira's gift for painting mythic figures from Indian legends, and poignantly underscores a very contemporary marriage dilemma, which Ruchira solves by intuiting her dead grandmother's advice. Equally excellent is ""The Names of Stars in Bengali,"" the beautifully nuanced story of a San Francisco wife and mother who returns to her native village in India to visit her mother, in which each understands afresh the emotional dislocation caused by stepping into ""a time machine called immigration"" that subjects them to ""the alien habits of a world they had imagined imperfectly."" One misses a similar level of sophistication in such stories as ""The Blooming Season for Cacti,"" ""The Love of a Good Man"" and ""The Lives of Strangers,"" all of which seem contrived, overwrought and predictable. Yet at her best, as in ""Mrs. Dutta Writes a Letter"" and ""The Intelligence of Wild Things,'' Divakaruni writes intensely touching tales of lapsed communication, inarticulate love and redemptive memories. This is a mixed collection, then, but one worth reading for the predominance of narratives that ring true as they illuminate the difficult adjustments of women in whom memory and duty must coexist with a new, often painful and disorienting set of standards. Starting with her first novel, The Mistress of Spices, India-born San Francisco resident Divakaruni has acquired a receptive audience, which undoubtedly will greet this new work with enthusiasm. Agent, Sandra Dijkstra. (Apr. 17)
close
Details