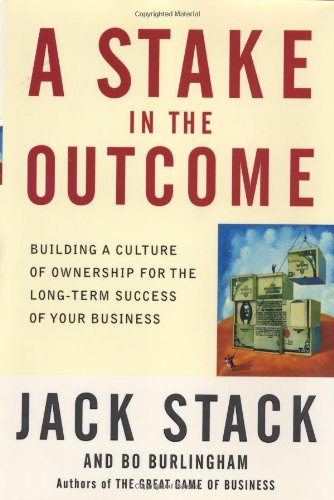 A STAKE IN THE OUTCOME: Building a Culture of Ownership for the Long-Term Success of Your Business

A refreshingly sensitive and sensible guide to motivating employees, this new volume by Stack and Burlingham () is a standout in its crowded genre. Stack is the president and CEO of SRC Holdings Corporation, an employee-owned supplier of renovated engines to auto companies and a celebrated business success story. In 1983, when it looked like SRC's parent company, International Harvester, might shut down its southwestern Missouri "remanufacturing" plant, Stack and 12 other employees bought the place and fashioned a system of employee ownership that turned SRC into a corporation of 22 companies with more than $100 million in sales. Using the experiences of SRC as well as other companies with "ownership cultures" as examples, Stack and Burlingham, an editor at . magazine, give the lowdown on how to keep employees energized, creative and acting like true owners of their company (beyond offering stock options). Their strategy, which is especially resonant after the Enron debacle, hinges largely on opening up the books to all employees and keeping the staff posted on financial matters. Also fascinating is the authors' idea of spinning workers off into an entirely new company as a way of stirring up new ideas from entrenched employees. This is an invigorating and surprisingly helpful text for those who want a humane but profitable way to manage their company.