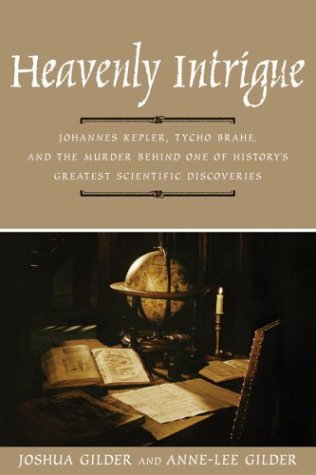 HEAVENLY INTRIGUE: Johannes Kepler, Tycho Brahe, and the Murder Behind One of History's Greatest Scientific Discoveries

Novelist Joshua Gilder ( ) and his wife, former TV producer and investigative reporter Anne-Lee Gilder, offer a startling twist on the story of the troubled relationship of Tycho Brahe and his assistant, Johannes Kepler—who together laid the foundation for modern astronomy—and Brahe's unexpected and suspicious death at age 54 in 1601. The cause of Brahe's death had been debated for 400 years, but in 1991, forensic study of remains of Brahe's hair discovered lethal levels of mercury in his system. Dismissing other medical explanations for the mercury levels, the Gilders conclude that Brahe was murdered by Kepler, whose own work on the three laws of planetary motion—laws that changed human understanding of the universe—would remain incomplete without Brahe's closely guarded observational data. The authors weave together the personal histories of Brahe and Kepler, as well as the political, religious and scientific debates that raged during their lives. They find evidence of Kepler's obsessive desire to obtain Brahe's observations in letters by the young scientist, whom they portray in 20th-century diagnostic terms as a sociopath, permanently scarred by an abusive childhood. The Gilders' portrait of Kepler is interesting, albeit unpleasant; they catalogue his penchant for fallings out, paranoia and scheming in off-putting detail, and the explanations of his early scientific theories, which were wrong and impenetrably dense, will not be of universal interest. The writing is professional but not noteworthy, and the Gilders occasionally stretch the inconclusive evidence into speculations too thin to persuade.