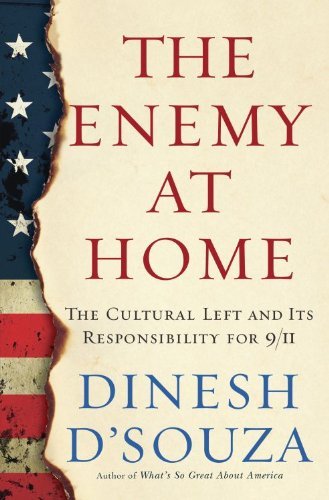 The Enemy at Home: The Cultural Left and Its Responsibility for 9/11

Conservative pundit D'Souza ( ) roots the blame for the 9/11 attacks in the left wing's "aggressive global campaign to undermine the traditional patriarchal family" in this mostly lucid but unconvincing argument. Pointing to Hillary Clinton, Britney Spears and Noam Chomsky, he decries those who have teamed up with Hollywood and the U.N. to foist an irreligious, sexually licentious, antifamily liberal culture—epitomized by Eve Ensler's play and gay marriage initiatives—on a Muslim world that rightly reviles it. By deliberately attacking Islamic values, the left tacitly allies itself with al- Qaeda in its effort to defeat Bush's war on terror and thus discredit conservatism at home, he asserts. But D'Souza's claim that Islamic extremists are inflamed solely by America's music videos and feminists—not its U.S. bases in Saudi Arabia, the Israeli-Palestinian conflict or American support for Muslim dictators—is too single-minded. For example, he paints Abu Ghraib poster-girl Lynndie England as the personification of liberal sexual depravity, without acknowledging that the U.S. Army sent her to Iraq, not the left. Charging that liberals aid terrorists while sympathizing with the terrorists' culturally conservative worldview, D'Souza's critique of American cultural excess trips over its own inconsistencies.