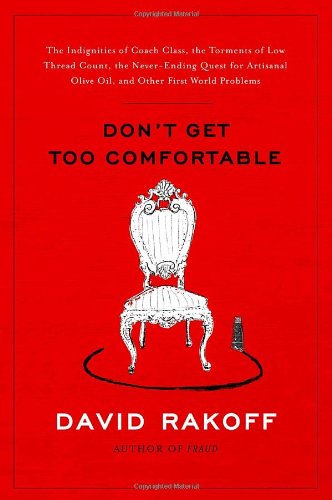 Don't Get Too Comfortable

The title of this collection of humorous essays could also serve as a warning label for its readers. They'll want to stay on guard as writer-at-large Rakoff ( ) skewers everything and everyone he encounters. His writing is at its best when trained on the pompous and ostentatious: flying on the Concorde or visiting an exclusive, $1,300-a-night resort off Belize. While attending the Paris couture shows, Rakoff reveals the silliness of the whole enterprise with quips about Karl Lagerfeld's pre–weight loss "large doughy rump" and the "dry spaghetti" of one model's hair. In another piece, a prominent Beverly Hills plastic surgeon tells Rakoff, "this is the Dark Ages" for cosmetic surgery (meaning that future generations will be amazed by the inevitable advances) before taking him into an examination room. While Rakoff's sardonic wit is clearly his greatest asset, it is sometimes his undoing; the same dry humor that works so well when aimed at the rich and decadent seems mean-spirited when applied to less prominent targets, like "Wildman" Steve Brill, who forages for food in New York City's parks. Still, Rakoff is generally a knowing observer of "first world problems," and his devilishly uncomfortable commentaries are generally quite funny.