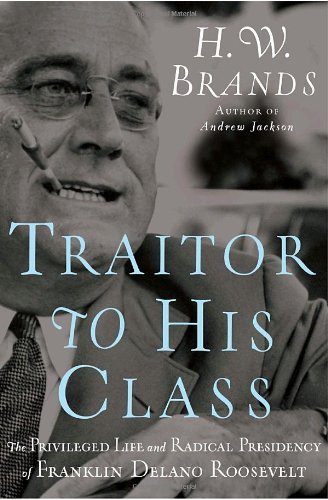 Traitor to His Class: The Privileged Life and Radical Presidency of Franklin Delano Roosevelt

It is unfortunate for University of Texas historian Brands ( ) that his serviceable biography of Franklin Roosevelt comes on the heels of Jean Smith's magisterial Francis Parkman Prize winner, (2007). Still, Brands provides an entirely adequate narrative detailing the well-known facts of Roosevelt's life. We have the young Knickerbocker aristocrat somewhat tentatively entering the dog-eat-dog world of local Democratic politics in New York's Hudson Valley. We have him embarking on a marriage with his cousin Eleanor that was fated to be politically successful but personally disastrous. We also have the somewhat spoiled son of privilege facing the first real battle of his life—polio—and emerging with greatly enhanced fortitude and empathy. Appropriately, Brands gives two-thirds of his book to FDR's presidency and its two most dramatic events: the domestic war against devastating economic depression (fought with tools that many in America's upper classes considered socialist), and the international war against Axis power aggression. It is fitting that Roosevelt commands the amount of scholarly attention that he does, but sad that so much is wholly redundant with what has come before. 16 pages of photos.