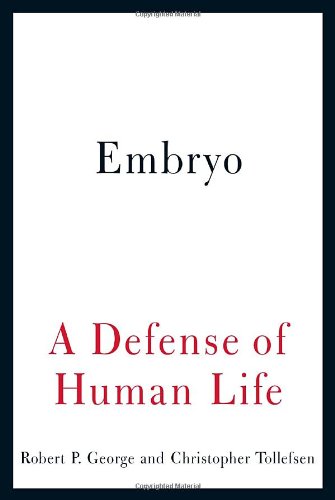 Embryo: A Defense of Human Life

In this unconvincing book, George ( ), a member of the President's Council on Bioethics, and Tollefsen, a philosophy professor at the University of South Carolina, envision the mass production and exploitation of embryos by scientists for research. In response, they affirm emphatically that an embryo deserves the same moral respect as a human—an argument well-known from religious sources but to which the authors attempt to give a scientific basis. George and Tollefsen offer a detailed scientific analysis of the making of the embryo to conclude that even a single-cell zygote has all the genetic characteristics of a human being. Thus, the embryo “is a complete or whole organism, though immature.” Against those who argue that the embryo lacks consciousness and thus is not fully human, the authors reject mind-body dualism and argue that the embryo has the capacity to develop into a rational being. Yet while these questions continue to provoke controversy in relation to abortion as well as embryo research, this book provides no compelling new evidence about the moral status of the embryo to persuade readers who do not already agree with them.