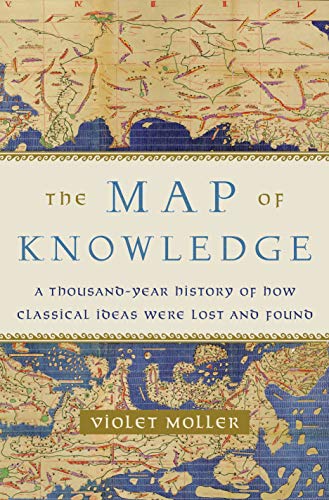 The Map of Knowledge: A Thousand-Year History of How Classical Ideas Were Lost and Found

In this unusual and well-crafted intellectual history of the medieval “dark ages,” when most classical mathematical, medical, and scientific knowledge was at the time widely believed to be lost, British historian Moller extols the roles of seven cities, largely near or along the Mediterranean basin, in the storage (via libraries, monasteries, or private collections), translation, discovery, and transmission of that knowledge. She looks at Alexandria (“the capital of the intellectual world for over a millennium”), Baghdad, Cordoba, Toledo, Salerno, Palermo, and Venice, which had in common “political stability, a regular supply of funding and of texts, a pool of talented... individuals and... an atmosphere of tolerance and inclusivity towards different nationalities and religions.” She introduces readers to a host of now-largely-unknown intellectual giants, such as the remarkable 12th-century Italian scholar and translator Gerard of Cremona, who was “a major conduit for the transfer of knowledge of the Arab world to the European.” In felicitous style, Moller unearths such fascinating developments as the origins of the dissection of cadavers and existence of women doctors in late medieval Italy. With so many figures and ideas to discuss, some movements, such as Muslim Mu’tazili theology, are referenced without much explanation. But overall, this is an impressive, wide-ranging examination of what might be called premodern intellectual and cultural geography. (May)
close
Details