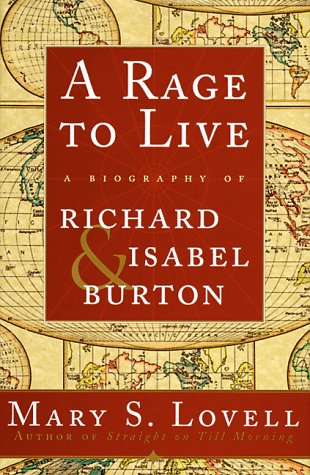 A Rage to Live: A Biography of Richard and Isabel Burton

Celebrated and excoriated during his lifetime, Sir Richard Francis Burton (1821-1890) was among the most eminent of Victorians. Soldier, spy, diplomat, linguist, scholar and translator of erotic fiction, he lived several lives at once. Lovell (Straight on Till Morning) chronicles his varied life and adds that of his wife, Isabel Arundell (1831-1891), a member of a prominent English Catholic family. By the time Burton married Arundell in 1861, he was famous for traveling alone and in disguise to Mecca (forbidden to non-Muslims) and for his even more spectacular expeditions in East Africa. Though welcome in high society, the Burtons seemed happier abroad, traveling as far afield as Brazil, Syria and Iceland. In the 1880s, Burton pursued an almost obsessive interest in Eastern erotica, translating 1001 Nights, the Kama Sutra and The Scented Garden, and thereby earning the censure of respectable countrymen. Lovell contradicts the assumption that Burton was homosexual and his relationship with his wife sexless; and demonstrates how the marriage was marked throughout by an equality rare in Victorian times. A judicious, self-effacing biographer, Lovell generally resists the temptation to intrude into the narrative, but she sometimes speculates where primary material is absent. She is best at recounting the Burtons' lives as history but weaker at explicating character--perhaps unavoidable given her subjects' guardedness. For all his restless accomplishment, Burton seems, judging from the evidence here, to have had a void at his center, an inability to connect to others. In this book, the Burtons remain curiously remote, never quite fulfilling the promise of the title. Photos not seen by PW. (Nov.)
close
Details