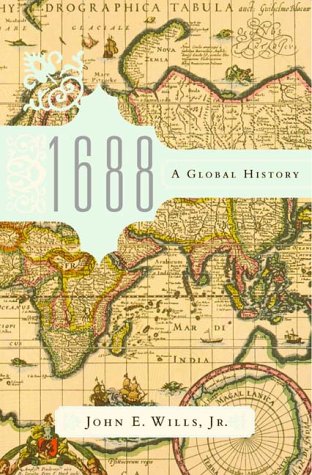 Although he realizes that ""the very concept of the world in a single year is an artificial one,"" USC historian Wills (Mountain of Fame: Portraits in Chinese History; etc.) has merged cultural anthropology and history to reflect through the prism of a single year the shape of the world poised on the edge of modernity. This ambitious effort has a number of strengths--such as the quality of its writing and its ability to weave together disparate narrative threads. But for many readers, this account's greatest strength will be what it is not--Eurocentric, limited by gender and ethnicity, confined by class. It touches on events in Africa, the New World, China, Japan, Australia and eastern and western Europe. We go from the world of the Kangxi emperor in China to that of an African Muslim slave in the New World. In constructing this multifarious history, Wills draws on sources as diverse as the correspondence of far-flung Jesuit missionaries, the records of the Dutch and English trading companies, contemporary poetry, diaries and even a ketubah (a Jewish marriage contract). Wills thus succeeds in producing a vivid picture of life in 1688--a picture filled with terrifying violence, frightening diseases and religious and political persecution, but also with comfortingly familiar human kindnesses, familial affections and the scientific and intellectual achievements of Leibniz, Locke and Newton, among others. Wills provides a satisfying, many-faceted tour of the world in 1688 that will appeal to readers with a far-ranging curiosity about the world and its history. Illus. not seen by PW. (Jan.)
close
Details