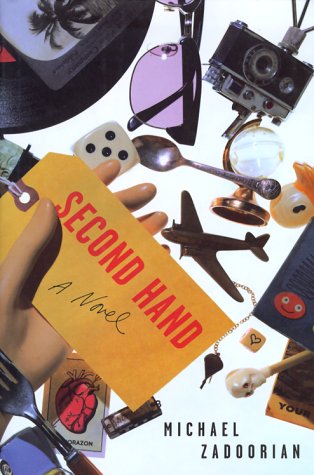 A hipster junk-store owner narrates Zadoorian's debut novel, a paean to the funky charms and emotional meanings of retro-kitsch objects. Richard, disillusioned by the pretentiousness of art school, is a happy-to-be-going-nowhere the sort of hero made popular by Nick Hornby in High Fidelity and About a Boy, and he's satisfied trolling Detroit's thrift stores, estate and garage sales for '50s-style bowling shirts, porkpie hats and antique LPs. His store, Satori Junk, reflects his belief in the ability of secondhand objects to illuminate life and provide a kind of nonemotional connection. (""When I die, I'll leave nothing but junk,"" the story begins.) Occasionally endowed with moments of genuinely witty vulnerability that save the narrative from becoming too flip, Richard's self-willed complacency is shattered by a series of events. First, his mother dies, and going through stuff in his parents' house, he comes across some items that move the cool connoisseur to tears. Then, after having gone years without a girlfriend, he meets and falls for Theresa Zulinski, the yin to his yang, a ""junk goddess"" who frequently scares him with her mercurial personality and penchant for skeletons. The ups and downs of melodrama can breed ennui, however, and like Johnson with London, when Richard is tired of junk he is tired of life. But a pilgrimage to Mexico during the Days of the Dead soon revives his spirits, granting him a new perspective. Related in short vignettes like a series of slides in a home movie, the narrative could serve as a handbook for recognizing hidden gems at flea markets. But it's something more: incisively humorous and surprisingly poignant, this is a quirky, surprisingly tender coming-of-age tale. Agent, Lori Pope for the Faith Childs Literary Agency. (Mar.)
close
Details