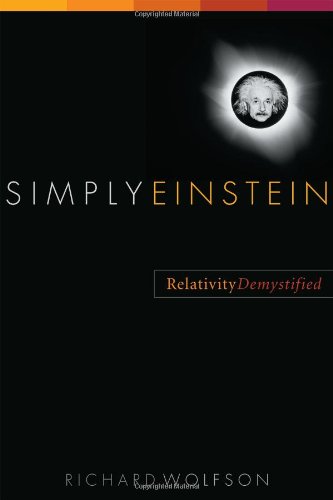 Wolfson, a physics professor at Middlebury College, takes the fear out of Einstein's relativity theory in this brisk piece of pop science. The author uses a tennis game on Venus and a cup of hot tea to elucidate the basics of relativity, i.e., that the laws of physics are the same regardless of one's state of motion. Wolfson's economy and his handiness with hip, offbeat examples make this slim book a mind-bendingly satisfying read. The author's tutorial on the history of physics reminds readers that all the big names up to the late 19th century—Copernicus, Galileo, Newton, Maxwell, etc.—were concerned with the question of motion, whether of celestial bodies, falling apples or waves of light. He then shows why it required a genius like Einstein to arrive at such a simple idea as relativity. The most well-known and seemingly counterintuitive consequence of Einstein's thought, which Wolfson renders perfectly sensible, is the notion that space and time are not absolute but instead relative to one's frame of reference. The author then addresses the problem of gravity in Einstein's theory, which led the German scientist to develop his general theory of relativity. For readers, this means warped and rippling spacetime, black holes, and expanding and parallel universes. Wolfson's economical and vivid tutorial should open doors for lay readers encountering Einstein's principles for the first time. His popular style, with a minimum of math, should make this a must-have book for Einstein buffs as well. 48 illus.